I call this dish Mushrooms Meunière, and it is prepared with the King Trumpet Mushroom as shown in both pictures, but you can choose other mushrooms and get a nice result as well. The specific character of a King Trumpet Mushroom, aka King Oyster Mushroom, is the very firm structure of the meat. Also this mushroom won’t produce much fluids while being fried, which is nice. The main ingredients except from the mushrooms are butter, which together with a little flour gave the dish it’s name meunière, and lemon juice and parsley.
The name refers to the method of preparation with these ingredients, primarily for fish though. The word meunière means “miller’s wife”. A meunière sauce is a simple preparation including brown butter, chopped parsley, and lemon. I didn’t use the flour for the King Trumpet Mushrooms, because flour is not good for an LCHF’er, but it could be an idea for the more juicy chestnut mushrooms. Flour in such a super small amount will do even on an LCHF Lifestyle. Recipe below.

Method for Mushrooms a la Meunière 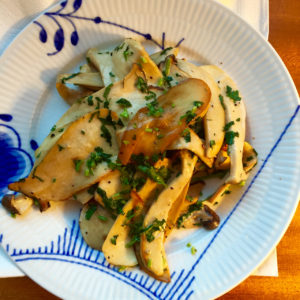 Slice the mushrooms into thin slices.  Fry them in light brown butter on a frying pan. Beware it won’t get too hot and darken.
When the slices have fried for three minutes add the lemon juice, the salt and pepper. Drizzle the mushrooms with the chopped parsley just before serving.
Make sure you get the mushrooms entirely covered by this nice meunière source. Serve on a plate.

A Variation of The Mushrooms Meunière

In the picture on the right you see a variation without the butter , but with olive oil instead.

Part the mushrooms into two halves. Makes scratches on the inner side with a knife like in the picture. Rub salt and pepper into the scratches.

Heat up a grill pan and put the halves on the dry grill when it’s very hot. Leave them 1 minute on each side.
Put them on a plate.
Drizzle olive oil and lemon juice on top of them and serve. Enjoy!

This site uses Akismet to reduce spam. Learn how your comment data is processed.

Type a word to search